The decrease of water quality down the river is due to the many unofficial contributors; not only agricultural and other runoff, but also pirate waste flowing of water, which may be shown by the severe fluctuations of the various parameters in the river. This is a "none point pollution" that cannot be entirely controlled, even with best regulation and control.

It is expected that in the future the quality of waste water supplied by WWTP will be upgraded. Will this upgrade supply water to the river with which it will be able to live with it and of it?

The River Authority tried to answer this question at a conference organized by it. Testing the stability of the various parameters in the water supplied by WWTP Ramat Hasharon, and an attempt to predict future qualities of the other WTPs after upgrading, demonstrated that even with tertiary treatment the quality of water is not good enough, and primarily, not stable enough. The river requires clean water 365 days a year. Even one day of severe deviation may destroy the gentle texture of life.

We are therefore handling two different issues: polish treatment at the outlet of WWTP, in order to create a buffer for fluctuations and irregularities and treatment along the river in order to cope with non-point contaminations and various temporary items that that flow into it.

In this system water flows along the roots of the aquatic and bog plants. The plant supplies oxygen and other substances that create a beneficial environment to micro-organisms which through cooperation between them and the plants are able to purify a large variety of pollutants such as nutrients, pathogens, oils, metals, detergents and even hormones, which have a crucial effect on life in the river (changing sex as observed among fish due to high amount of hormones in treated waste water).

The System, developed by Ofra Aqua, integrates a number of various methods that were developed in different places in the world and is suitable to the system of needs and options in Israel.

CW offers a variety of flowing methods as well as beds and plants, so that a large number of solutions can be found to deal with the phenomenon of pollutants, and efficiently obtain a high quality of water. The large variety of plants adds a magnificent sight to the landscape and can be integrated in the river bank. 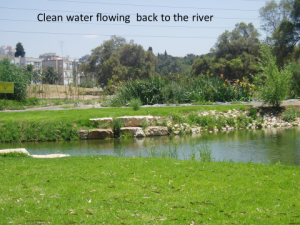 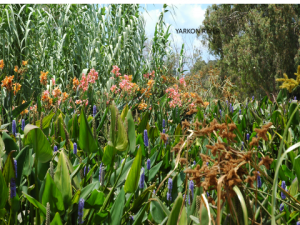 As opposed to reed beds which use Phragmites Australis, there is very little water loss in this system, preventing the danger of Salination (due to significantly less Evapotranspiration). Long-term systems show a significant decrease in sodium quantities.

A 2,000 m2 system in Seven Mill Site demonstrates the feasibility of applying that system to treat the river water. The system was designed and constructed by Ofra Aqua and sponsored by the Ministry of the Environment and the Jewish National Fund. It was built on the grounds of Joshua Gardens.

The daily supply of 400 m3 water is pumped from the Yarkon River into a system that consists of 4 beds and two open ponds that were later constructed for polish and decoration. These two ponds have to cope with a flock of ducks that moved into the pond from the river receiving a great deal of food from loving citizens which pollutes the water regularly. Water from these ponds flows back into the river.

Unfortunately, public financing was too short to monitor the system regularly and acquire information needed for the future. Ofra Aqua took upon itself to handle this task. During the months of March-April 2005, when the system was only a few months old, water samples were taken in order to test the system performance.

At first glance the fluctuations in the measured parameters were obvious.

It may be assumed that these fluctuations partly derived from the instability of the water quality from the major contributors, yet primarily due to the pirate flowing of waste water which is very hard to trace.

The BOD and COD values fluctuate between 85 and 7.3 for BOD (the value of 151 MGL of BOD on 30.4 seems suspicious, especially in light of the low BOD values, and also because there is no other evidence for such exceptional value), and between 160 and 51 for COD.

Mineral oils were found only in the first sampling (8 MGL) and in the last sampling 5MGL of oils and grease were found. In any case the system was able to cope with the pollution perfectly. The history of the river teaches that higher values are expected during the Hanukkah holiday.

Despite the young age of the system, it copes very well with irregular values, and reduces the pollutants impressively.

According to the accumulated experience with NBS systems, during the first months of the system life there is no reduction in sodium and boron. Reduction will only start with the full fruition of the system; however, it is important to observe that there is no increase in these parameters, as concerned by the Ministry of the Environment.

In the upcoming months performance of the system throughout the different yearly seasons should be observed, and with the fruition of the system other more complex, yet not less important, parameters will be tested for the life of the river. Hopefully public financing will be found for that purpose.

In conjunction, Ofra Aqua designed and constructed another project related to the Yarkon River: this is a large scope research project that was constructed for the Tel-Aviv University (Chief researcher and study coordinator: Prof. Avital Gazit), with the generous financing of the Italian Ministry of the Environment.

The system is trying to learn the various CW methods (flowing method and various plants), when the last pond in each row of ponds simulates the River. In this pond not only standard parameters are tested, but also a comprehensive biological monitoring is conducted in order to analyze the existing bio-systems as a function of the quality of water and the contribution of the filtration system. In this system the issue of hormones and pharmaceutical drugs that can be found in the treated water but not treated by conventional filtration systems is tested.

The accumulated knowledge in these two projects offers a real answer to the problem of river pollution in general, and the Yarkon River in particular.

In the meantime the system raises much public interest. Many people visit the site, whether individually or in organized tours, when public or private guided tours are conducted at the location. It is hopeful that the area will be shortly completed and will turn the place to a first class educational and tourist site.